A noteworthy review of Introducing Dinosaurs from Booklist on October 1, 2009 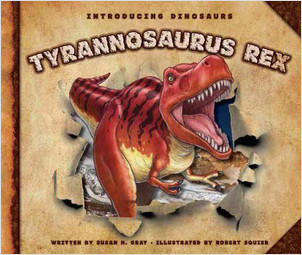 This title in the Introducing Dinosaurs series offers younger readers a visually appealing, simple introduction to the fearsome ‘tyrant lizard king.’ The text is simple and straightforward. Gray uses everyday objects familiar to children to detail the physical characteristics of T. rex, describing its teeth as ‘larger than bananas,’ its weight ‘as much as four cars,’ and its head ‘the size of a refrigerator.’ Vocabulary words defined in a glossary are highlighted in the text. Squier’s illustrations depicts a toothy T. rex with red-hued skin, tigerlike stripes on its back, and a yellowish underbelly—a beast with a menacing but not overly frightening appearance. Photographs of dinosaur skeletons in museums and of paleontologists at work are included, as is a map showing where T. rex fossils have been found. Further reading, a glossary, and an index close out this succinct offering.