A noteworthy review of True Animal Stories from Booklist on October 1, 2014 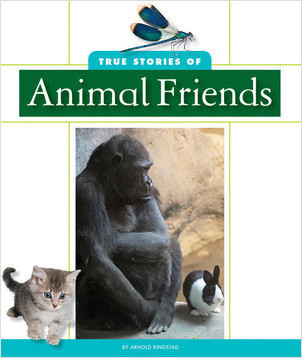 Lions and tigers and bears . . . together? Everyone loves a story about unlikely friends, and this volume in the True Animal Stories series covers, among other things, a heartwarming partnership between a cheetah and a dog (Sahara and Alex, to be exact); a gorilla who adopted a rabbit; and a dragonfly who just happened to perch on a frog without being eaten. The brief text is light on detail—more discerning readers may have lingering questions about the animal buddies—and some of the creatures featured aren’t friends that interact as much as animals placed in close proximity (the dog that likes to watch fish swim is a stretch). Still, the well-laid-out pictures, featuring the creatures’ distinctive features, from claws to paws to scales, range from charming to downright squeal inducing and are sure to delight any young animal fan.