A noteworthy review of Ancient Warriors from Children's Bookwatch on April 1, 2015 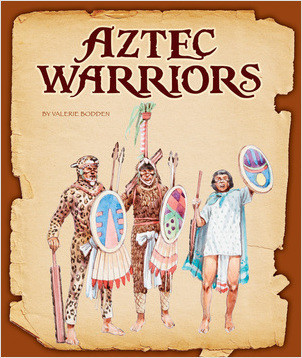 Filled with detailed illustrations from the Codex Mendoza and other authentic sources about Aztec life, ‘Aztec Warriors’ provides a discerning overview of the role and attributes of a classic Aztec warrior, within the context of Aztec historical background from 1325 to 1521, displayed upon the chronological Timeline on page 30. The Aztec warrior is described, both in outer appearance and costume and in mind frame before battle and inner attitudes, as well as flexibility in filling dual roles, such as soldier and farmer. Battle tactics, clothing and weapons, and the rise of the Spanish Conquest are outlined. Narrative language is simple but sophisticated. An interesting feature that encourages learning through emotional identification contrasts accepted Aztec practices, written in white type against a dark gray background, with an alternative presented as Another View, in white print against a deep tan background. Another View sidebars generally end with a question such as ’ How do you think Aztec boys felt about becoming warriors?’ This vivid comparative thinking technique skillfully presents contrasts in attitudes towards the cultural conflict that grew between the Aztec warriors and ruler and the Spanish explorers. Excellent art works, such as a mural by Diego Rivera showing the Spanish battling Aztec warriors, are shown in part to tell the story of the warriors of Tenochtitlan. Ending with a Timeline of significant events from 1325 to 1521 A.D., a glossary, and suggested resources and web sites to learn more, ‘Aztec Warriors’ is an excellent nonfiction resource for students ages 9-10 and up. Also highly recommended are the following additional titles from this exciting series on ancient warriors: Samurai Warriors (9781631437595), Roman Gladiators (9781631437588), Ninja Warriors (9781631437571), Mongol Warriors (9781631437564), Spartan Warriors (9781631437601), Medieval Knights (9781631437557), and Viking Warriors (9781631437618).