A noteworthy review of Incredible Sports Records from Booklist on November 1, 2016 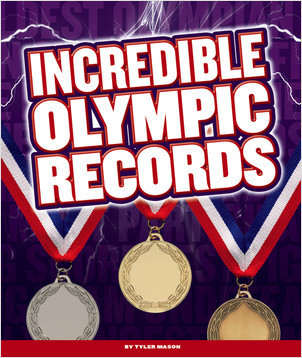 From the Incredible Sports Records series, this appealing book looks at Olympic records. While results from the 2016 Summer Games are not included, that matters less than media hype might suggest. Michael Phelps’ record for the most gold medals in one year (eight in 2008) still stands, and so does Florence Griffith Joyner’s 1988 Olympic record-setting time for the women’s 100-meter dash. Usain Bolt set the record for the Olympic men’s 100-meter dash in 2012, and Nadia Comneci will always be the first gymnast to earn a perfect score (in 1976). Most of the triumphs discussed here appear on a single page that includes an informative paragraph of text as well as a color or black-and-white action photo. A satisfying introduction to fastest, strongest, winningest accomplishments of Olympians past and present.