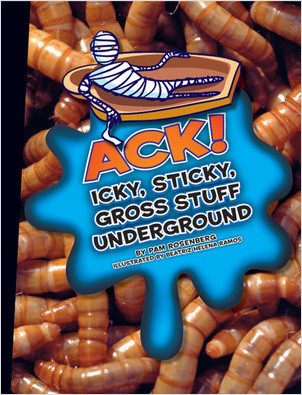 Rosenberg dishes up an assortment of fascinating facts to delight readers. Ack! discusses underground insects and animals, including corpses. Blecch! covers cold germs spread by classmates, bacteria at the water fountain, and the sweat shed in gym class. Eek! describes some perhaps-not-so-palatable ingredients that may be found in common foods (like insect fragments in peanut butter), and cultures that include cats, dogs, and guinea pigs in their diets. Eew! discusses blood, poop, puke, and so on. The humorous texts include a variety of fonts, sizes, and hues, which may be overwhelming at first glance but are easy to get used to. Silly computer-generated cartoon illustrations are intermingled with occasional photographs. Children who are still in awe of body functions and find creepy crawly things neat will be squirming for these titles, which may whet their appetites for additional information.