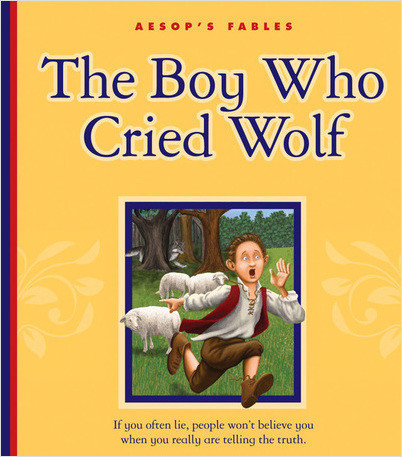 The Boy Who Cried Wolf

A bored shepherd entertains himself by falsely telling townspeople a wolf is stealing his sheep. When a wolf really does appear, the twice-tricked townspeople are convinced the shepherd is lying, and no one comes to his aid.

A noteworthy review of Aesop's Fables from Booklist on October 15, 2010

Does the world literature canon include any secular stories that are as enduring and adaptable as Aesop’s 2,500-year-old fables? These titles in the Aesop’s Fables series retell the ancient stories for an elementary-school audience with simplified language and sentence structures and large, clear type aimed at newly independent readers. Reversing the order followed in many Aesop’s volumes, the moral appears here on an opening spread in each volume as well as on the cover of the book. While the text’s rhythm sometimes lacks a graceful flow, the clean, uncluttered design and bright, engaging artwork greatly boost each title’s appeal with inventive details. In an opening scene in The Boy Who Cried Wolf, for example, the little drama king stretches his arms past the picture’s borders, creating an energizing, almost 3-D illusion. In The Fox and the Grapes, Harrison dangles the elusive fruit partly out of the frame of view, making it seem even more inaccessible to the furious fox. The Maid and the Milk Pail combines both real and daydreamed worlds in the same image. And The Wolf in Sheep’s Clothing stands out for the sheer expressiveness of the wily wolf who meets his unfortunate end. Brief notes about both Aesop and fables in general close these volumes in a sturdy series that should find wide classroom use.

Mary Berendes has authored several books for children, including nature titles as well as books about various countries and holidays. A longtime resident of Minnesota, Mary has numerous pastimes to occupy her during the seemingly unending Minnesota winters, including collecting antique books and playing the piano. Her beloved Yorkshire terrier also provides plenty of entertainment...and confusion...and comic relief...on a daily basis.