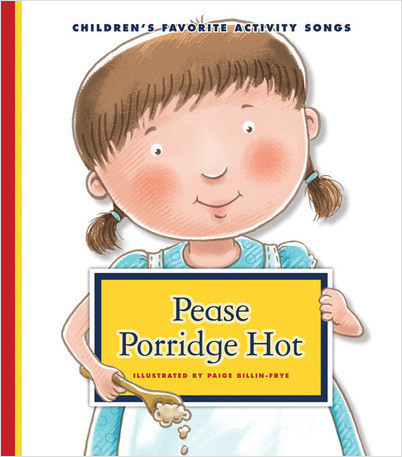 A young girl says this classic rhyme as she serves her dolls pease porridge at a tea party.

A noteworthy review of Favorite Children's Songs from Booklist on March 1, 2011

The slim volumes in the Children’s Favorite Activity Songs series each contain a page explaining the benefits of nursery rhymes and activity songs. The bullet-pointed list notes that singing along helps memory, expands vocabulary, builds a child’s self-confidence, and sharpens listening skills, among other reasons. The songs themselves will already be familiar to some children; regardless, information at the back explains the activity. Farmer in the Dell features the expected cast (although, rather oddly, they are never seen together, even at the conclusion), each grabbing the next character as the song moves along. At the end, the complete lyrics appear with instructions that begin, ‘Players join hands and make a circle’ and end with ‘The ’cheese’ player becomes the ‘farmer’ for the next game.’ The short rhyme of Pease Porridge Hot is bolstered by a hand-clapping game. Some will be surprised to find that Take Me out to the Ball Game has an activity that goes with it, too. It’s not much of one, with some swaying, shaking of the head, and shrugging of the shoulders, but the enthusiasm associated with the tune comes through. The colorful art features front-and-center characters against white space, all of whom seem to be having a fine time.