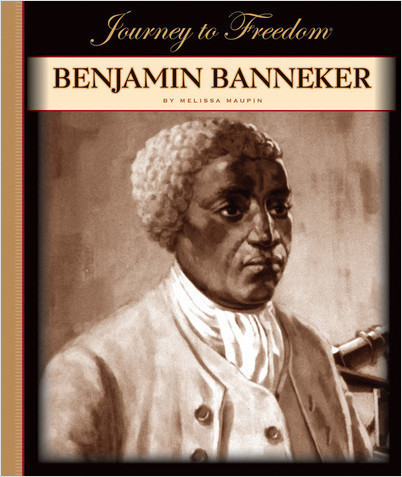 Eighteenth-century inventor and astronomer Benjamin Banneker was widely known and respected in his time. Most of what he knew, he taught himself. His letter to Thomas Jefferson asked the future president to reconsider his racial prejudices. Later, abolitionists would use Banneker as proof that people of any race can be equally intelligent.

A noteworthy review of Journey to Freedom from Library Media Connection on May 1, 2010

This series includes titles covering historical events as well as the life stories of individuals who played many roles in African-American history. Each title includes text and illustrations, with excellent supplementary materials such as a timeline, glossary, and further reference materials designed to assist the reader in understanding the content and to extend their knowledge of the subject matter. Illustrations include replicas of primary source documents as well as photos, drawings, and maps. Sidebars throughout the volumes provide further explanation of concepts included in the text. These titles would complement any collection, providing quality content for the elementary level and well-written hi-lo (high interest, low reading level) historical materials at the secondary level.

A noteworthy review of Journey to Freedom from Booklist on February 1, 2010

Benjamin Banneker, one of America’s greatest African American scientists and mathematicians, grew up free on a Maryland farm owned by his grandmother and parents. He attended the local Quaker school, where his inquisitive mind opened many opportunities. Benjamin made a working wooden clock; became an astronomer and a surveyor; wrote an almanac; helped survey the nation’s new capitol, Washington, D.C.; and became an outspoken antislavery advocate. As part of the continuing Journey to Freedom series, Maupin has created an accessible account of Banneker’s life and accomplishments. Short, uncomplicated text is interspersed with sepia-tone primary source photographs and documents, while sidebars give brief extensions of information without distracting from the story. Includes a time line, a glossary with pronunciations, further readings, and an index.