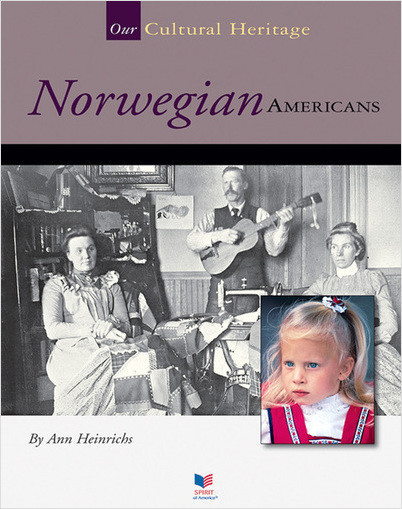 From the Set Our Cultural Heritage

Norwegian Americans tells the story of Norwegian immigrants who came to America for opportunity while attempting to maintain their cultural ties without losing them in the New World. Kids will learn about the culture as well as the struggles of the Norwegian Americans as they worked to succeed in America.

A noteworthy review of Our Cultural Heritage from MultiCultural Review on September 1, 2004

With these six volumes, this series for students in the middle elementary grades now includes entries on 24 different American ethnic groups. Each volume traces the history of a particular group in America, beginning with the earliest immigrants and ending with a chapter on the influence the group has had on American culture. Often included is a section on famous Americans (those with Norwegian heritage include Marilyn Monroe, Hubert Humphrey, and Renee Zellweger). The text is accompanied by numerous photos and illustrations, with short ‘Interesting Facts’ scattered throughout; in the Spanish American volume, we learn that the phrases ‘two bits’ and ‘pieces of eight’ came from the practice of cutting early Spanish money into pieces to make the right change. The books include a time line, a glossary of words bolded in the text, a list of books and web sites for further reading, and an index. They provide solid historical background on each of these groups…