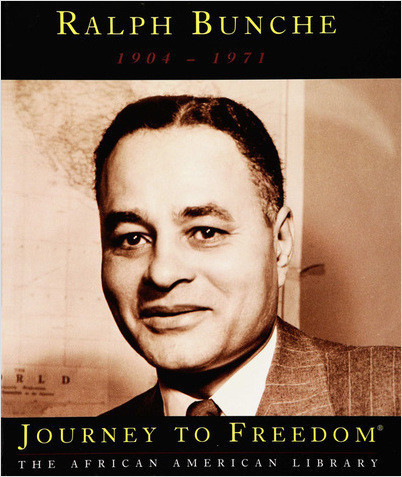 From the Set Journey to Freedom: The African American Library: Set D

Includes bibliographical references and index. A biography of Ralph Bunche, the African-American who won the Nobel peace prize in 1950. Text and photographs depict the tireless fighter for peace and human dignity who rose from modest circumstances to become the foremost mediator and peacekeeper of his time.

A noteworthy review of Journey to Freedom: The African American Library from Book Links on November 1, 2005

With an open design, clear text, and abundant illustrations, this series includes biographies of both famous and lesser-known figures as well as books on key events and groups in African American history. This is a recommended nonfiction series.

A noteworthy review of Journey to Freedom: The African American Library from MultiCultural Review on June 1, 2003

What is immediately striking about the entries in this 42-volume series for middle school students is a serious and elegant design unusual for this level. Each volume has a large photo bordered in black on the cover (the books are an expansive 9 1/4 × 10 1/2 inches), and within the books the color and black-and-white photos and drawings are designed to appear like actual photos affixed to the page. Captions and short sidebars are deep red boxes with gold type and borders. The majority of the volumes in the entire series, as of those listed above, are biographies of individual figures in African-American history. These are easy-to-follow and fairly complete, and they include a time line, a list of books and web sites, and a glossary that defines the terms that are occasionally bolded in the text. What is most distinctive again from other biographies of this type is the visual element, with such illustrations included as a collage made by Louis Armstrong of news clippings about Jackie Robinson, and a classic 1950s photo from Toni Morrison’s high school yearbook. The volumes on larger topics such as slavery and the civil rights movement naturally treat their subjects less comprehensively than the biographies do. (Other titles besides those above include ones on African-Americans in the Revolutionary War, the Emancipation Proclamation, and Kwanzaa.) The subject volumes do a good job, however, of giving a general background and including the most important events, figures, and concepts. Overall, the Journey to Freedom series has something of a coffee-table-book, Time-Life feel to it. This may seem almost intimidating to its intended audience at first, but the clear, large text and striking visual elements should make these books a valuable resource for students investigating African-American history, and in particular some of its most interesting figures.

A noteworthy review of Journey to Freedom: The African American Library from School Library Journal on February 1, 2002

These basic biographies present clear pictures of their subjects, their accomplishments, and their legacies – Malcolm X as a civil rights activist, Ralph Bunche as a U.N. peacemaker, and Charles Drew as a medical pioneer. The individuals are all shown in a positive light. Crushshon gives a fair account of Malcolm X without negating some difficult times and racial viewpoints that were part of his life. Well-designed, the layouts are clean and uncluttered; the bordered sepia-toned photographs are of above-average quality.

Joseph D. McNair is a native of Augusta, Georgia. In a career spanning twenty-seven years, he has taught and/or administered at every level of public education in the United States and in Nigeria. At an earlier stage in his career, Professor McNair held California-based positions of Director of Early Childhood Education, middle school Assistant Principal, elementary/middle school Principal, and district level Manager of Programs and Personnel. in the1980's, Professor McNair enacted a mid-career shift to the professorate and obtained a multi-year appointment as Assistant Professor of Education at Ahmadu Bello University in Northern Nigeria, the largest university in Black Africa. Since returning to the United States in 1990, he has continued to work in the postsecondary education sector, holding joint appointments at Florida International University as Adjunct Professor in the College of Education and Director of the James L. and John S. Knight Excellence in Education Project: For Our Children in Urban Settings (F.O.C.U.S.) Professional Development Component. However, his principal appointment from 1991 to the present has been that of Associate Professor. Senior of Education at Miami-Dade Community College, North Campus, in Miami, Florida. Professor McNair's academic background includes an undergraduate degree in Political Science (Gonzaga University) anda masters degree in Educational Administration (Antioch College), andadditional doctoral level course work taken at the University of San Francisco and Ahmadu Bello University, Nigeria. His academic and experience-based expertise has been highly sought by and generously shared with educators in domestic and international settings. In Nigeria, Professor McNair worked closely with a team of consultants assisting the Nigerian Government with its transition to a 6-3-3-4 education system design. In South Florida, he has been the architect of multi-institutional collaborations for the improvement of public education, working in partnership with nine Dade County public schools as well as volunteer and advocacy social service agencies. Professor McNair's service to the educational community has included conducting numerous workshops throughout the state of Florida on issues of diversity, the development of multicultural awareness and consciousness, and the establishment of Professional Development School (PDS) partnerships. Through these varied contributions, he has established a reputation of being an important community resource and a leading advocate for multicultural/antibias/social justice education and increased retention of underrepresented groups in higher education. He has been successful in providing quality training of preservice interns in developmentally appropriate practices, multicultural/atibias/social justice and 'understanding' pedagogies. Professor McNair has spent his entire teaching career motivating countless numbers of students to maximize their potential for achievement. He was awarded the 1995 JM (Jim Moran) Family African American Achievement Award in Education and the 1997 Mitchell Wolfson Endowed Teaching Chair for excellence in teaching. He was in addition a 1998 nominee for the The Green Family Foundation's American Family Values Award and a recipient of the 2000-2001 Innovation of the Year Award from the League of Innovation in the Community college. In addition to the three (3) biographies -Leontyne Price, Barbara Jordan, and Ralph Bunche - written for A Child's World, he is the author of three books of Poetry -Earth Book (1972) Juba Girl (1974) and An Odyssey (1976), two (2) college textbooks, Personal Transformations (the Process of Multicultural Awreness/ Consciousness, 1996/1998) and Individuals in Transition (1996/1998). He is also the online editor of Asili: The Journal of Multicultural Heartspeak http://www.mdcc.edu/north/asili/index.html