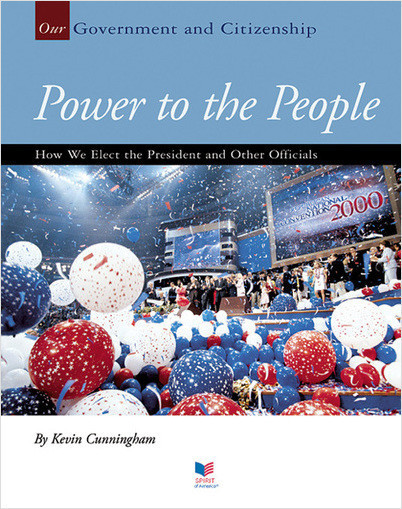 Power to the People

How We Elect the President and Other Officials

From the Set Our Government and Citizenship

Young readers get a well-rounded overview of the election process and learn about the history of democracy in America. Perhaps most importantly, they discover how average people play a crucial role in political elections, as well as why their continued involvement is so essential to our nation's future.

A noteworthy review of Our Government and Citizenship from School Library Journal on January 1, 2005

Each book is well organized and has concise explanations of its subject. Many captioned, full-color photographs and reproductions complement the texts. Short articles within the chapters extend student interest. Declaration and Constitution discuss the documents in a clear, straightforward manner. Russell Freedman’s Give Me Liberty! (Holiday House, 2000) is a more complete reference on this subject while Syl Sobel’s The U.S. Constitution and You (Barron’s, 2001) is more engaging. Power is a bit more confusing, with information on many elected offices crammed into one chapter. Useful additions for student reports where needed.

A noteworthy review of Our Government and Citizenship from Booklist on October 15, 2004

Titles in the new series Our Government and Citizenship provide straightforward information that explains the different facets of the U.S. government. Government introduces the concept of democracy by describing how it worked in ancient Athens and Rome and then shows how the North American colonists reshaped those political ideals to form a new nation. Succinct wording makes clear why we need different levels of governing no matter where in the U.S. we live and why our system of checks and balances on the federal level is effective. Power to the People explains how we elect our governmental officials, with most of the chapters taking readers chronologically through the process of how candidates campaign and get elected. Photos and drawings in both books are clear and well selected, and, especially in Power, the author is careful to provide balanced coverage of political parties. Particularly helpful is Power’s final chapter, which makes the process of voting seem both easy and important. Both books include a time line, and a glossary. Recommended purchase.

A noteworthy review of Our Government and Citizenship from Booklist on October 15, 2004

Kevin Cunningham is an author and travel writer. He studied journalism and history at the University of Illinois at Urbana. His other books include Condoleezza Rice: Educator and Presidential Adviser, The Declaration of Independence, and The U.S. Congress: Who Represents You. He lives in Chicago.