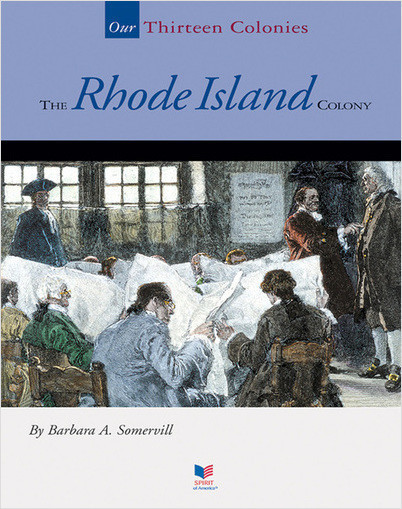 From the Set Our Thirteen Colonies

Introduction to one of the United States' original colonies, Rhode Island. Describes its origins, its leaders, and the colony's role in America's independence from Great Britain.

A noteworthy review of Our Thirteen Colonies from Library Media Connection on May 1, 2004

This new series gives a colorful and more politically correct introduction to the history of the early colonies than books published some years ago. Each entry contains a timeline, short glossary, brief list of the colony’s founding fathers, page of Web sites, index, and books and other places to visit or contact for more information. In each case 29 pages of liberally illustrated text precede these items. The illustrations are a well-chosen mix of prints of early American art, b&w engravings or line drawings, maps, and color photos. The first chapter of each book contains information about prehistoric men and then describes the indigenous peoples of the area, including the devastating effects of contact with the Europeans. Subsequent chapters outline the historical contributions of each colony to the development of our federal government. The print is large, layouts are varied, and sentences and paragraphs are short and concise. Modern research has added interesting new information to traditional literature on this subject, especially in the chapters on Native Americans and early explorers.

A noteworthy review of Our Thirteen Colonies from Librarian's Book Review on December 1, 2003

I enjoyed reading these books. I’d like to order more of the series for my 5th graders who do reports on the colonies.

Barbara A. Somervill is the author of many books for children. She also writes video scripts and textbooks. She loves learning and sees every writing project as a chance to learn new information or gain a new understanding. Somervill grew up in New York State, but she has also lived in Toronto, Canada; Canberra, Australia; California; and South Carolina. She is a graduate of Saint Lawrence University in Canton, New York, and currently lives with her husband in Simpsonville, South Carolina.