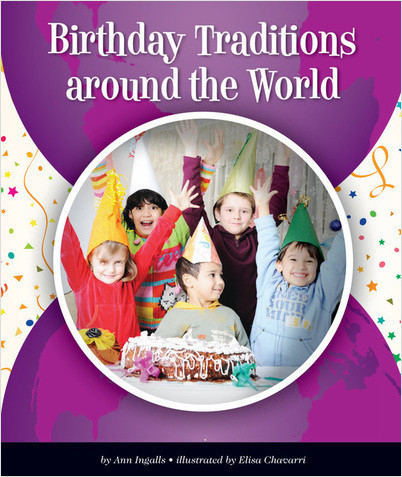 Birthday Traditions around the World

From the Set World Traditions

A noteworthy review of World Traditions from Booklist on April 1, 2013

In this title in the World Traditions series, we’re celebrating birthday customs around the globe. In Ghana, birthday boys and girls eat oto for breakfast, a mix of sweet potatoes and onions, along with hard-boiled eggs. Later they play a game called ampe, which involves clapping and jumping. In Central and South America, birthdays are celebrated with a piñata, a papier-mâché animal filled with candy and toys. Twelve countries in all are featured here, with some covered in a single paragraph of text, and others in several. Images include maps, photos, and the occasional painting. Piñata-making instructions conclude, along with birthday songs in four different languages; in Korean, it begins ‘Sang-il Chookha-Hapneeda.’ Kids love blowing out their own birthday candles, so they’re sure to find this interesting.

A noteworthy review of World Traditions from School Library Journal on April 1, 2013

Readers are introduced to the different beliefs and holiday celebrations of people around the globe. For example, Birthday covers events such as quinceaneras and Bar Mitzvahs and Bat Mitzvahs. The sections are concise (usually one spread or a single page) and arranged by countries or belief traditions with text providing the history and origins, songs, and celebrations of the traditions introduced. Vivid, full-page illustrations and photographs appear throughout. Maps and occasional captions (e.g., ‘The lucky magpie takes Korean children’s lost teeth.‘) provide additional facts. Each title contains a ’Hands On’ activity and an ‘Up Close’ section that extends the topics with crafts, stories, songs, and recipes. Though nothing spectacular, this series integrates visual information and broad facts well, making it a general purchase for most collections.

A noteworthy review of World Traditions from Children's Bookwatch on April 1, 2013