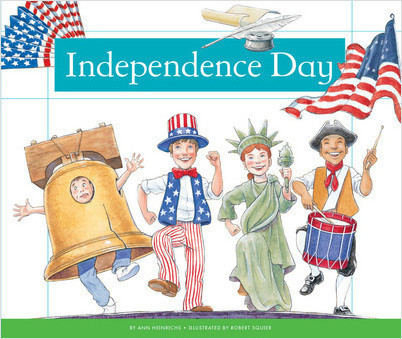 From the Set Holidays and Celebrations

Fireworks, parades, and picnics are just a few of the ways Americans commemorate their freedom every July. Colorful photos and engaging text tell the story of our struggle for independence from Great Britain. Young readers are sure to love the kid-friendly activities and recipes that offer new ways to bring the Fourth of July to life!

A noteworthy review of Holidays and Celebrations from Children's Bookwatch on September 1, 2013

Independence Day begins with an introductory chapter on celebrating America’s birthday. It continues with background history of the Declaration of Independence, favored celebration activities including parades, songs, marches, flags and fireworks. Lyrics of favorite patriotic songs are included, along with a recipe for healthy Patriotic Fruit Salad and directions for making a flag fan for a Fourth craft activity. Final pages include a listing of web sites and bibliography, a handy glossary of terms, and an index. All pages are tastefully illustrated with water color, ink and pencil art works of favored Independence Day activities and events. Independence Day is an appropriate educational resource for students age 7-11, along with other titles from the same Holidays and Celebrations series.