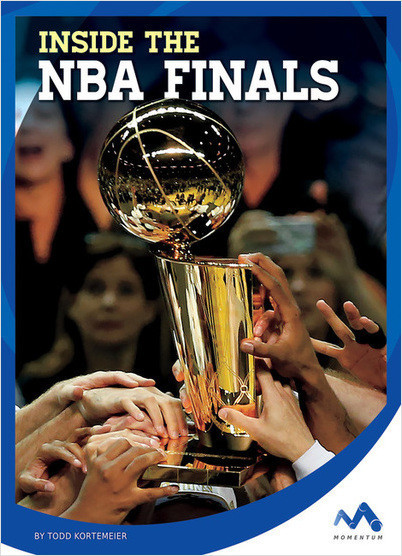 Inside the NBA Finals

From the Set Inside Look at Sports Events

Through narrative nonfiction text, readers learn about the excitement and drama of playing for, coaching, and cheering on teams in basketball's exhilarating championship series. Additional features to aid comprehension include a table of contents, a fast-fact section, fact-filled captions and callouts, a glossary, sources for further research, an introduction to the author, and a listing of source notes.

A noteworthy review of Inside Look at Sports Events from Booklist on June 1, 2016

Rather than presenting the facts historically or analytically, each volume in the Inside Look at Sports Events series leads off with a two-page informational section in a Q&A format, and then offers five narrative chapters, each from a different point of view. The result is a book that complements more traditional treatments of the subject while engaging superfans as well as newbies to each sport. Source notes are provided for the many quotes from participants. Daytona 500 features 20-year-old Trevor Bayne as the youngest winner of the race, in 2011, and Kim Lopez as the first woman and the first Hispanic chief starter, in 2015. NBA Finals offers Michael Jordan’s ’Player’s Perspective’ about the Bulls’ 1991 NBA Finals win and an ’Owner’s Perspective’ from Mark Cuban on the Mavericks’ 2006 and 2011 Finals games. In Super Bowl, ‘The Fans’ Perspective’ profiles several people who have attended every Super Bowl, while ‘A Referee’s Perspective’ introduces a ref who officiated the Super Bowl in 2012. World Cup opens with ‘The Team’s Perspective,’ which focuses on the Timor-Leste’s first regional match wins, in 2015. ‘A Country’s Perspective’ discusses football culture in Brazil. Many color photos, including action scenes, illustrate the text. Using a narrative approach and multiple perspectives, this appealing series offers a different slant on championships and other major sporting events.

A noteworthy review of Inside Look at Sports Events from School Library Journal on April 1, 2016

This immersive series will make students experts at major sporting events in no time. Each volume is prefaced by effectively answering the five W’s (who, what, where, when why) in a ‘Fast Facts’ section. The volumes are slim, but they pack a lot of information. As these titles can occasionally be a bit dry, this set is for ardent readers who want to focus on learning minute details on the series topics. The text employs multiple perspectives (typically from the sports creator, a fan, an on-field observer, and an athlete) with lots of primary source quotes. World Cup disappointingly makes little mention of the women’s league, a real missed opportunity considering that the U.S. Women’s national team won the 2015 FIFA Women’s World Cup. Very informative with good notes for research purposes, but not the most exciting or gender-inclusive books on the roster. Inside Look at Sports Events