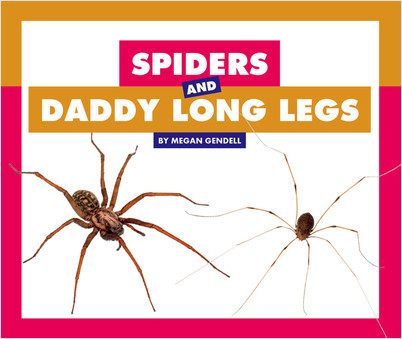 From the Set Comparing Animal Differences

Explores the similarities between spiders and daddy long legs, and how to tell them apart. Discover how traits like body shape, ability to make silk, and defense mechanisms can be used to identify these common arachnids. Additional features include a side-by-side comparison of the animals, an activity encouraging readers to demonstrate their knowledge, a phonetic glossary, sources for further reading, an introduction to the author, and an index.

A noteworthy review of Comparing Animal Differences from Booklist on June 1, 2020

These simple but informative books in the Comparing Animal Differences series each cover two related (and frequently confused) animal species. After a brief introduction, each animal gets its own coverage in one chapter. A final chapter—called ’What’s the Difference?‘—compares and contrasts the two species. In Alligators and Crocodiles, Reed contrasts where alligators and crocodiles live (fresh versus saltwater), whether their teeth show or are hidden, and how long they care for their babies. In Llamas and Alpacas, the author points out that the two kinds of animals can ’have babies together’ before noting differences in their bodies, fur, and temperament. In Spiders and Daddy Long Legs, readers learn that only spiders can spin silk and webs and regrow lost legs. In Toads and Frogs, York acknowledges both the usual characteristics of each amphibian and the overlap between the two. The back matter for each book adds photos of the two animals with call-out labels highlighting various body parts or features, a glossary, print and online sources for further learning, an activity (to draw the two animals, showing their differences), and an index. Appealingly simple, with one large, often full-page photo per spread, these books contain just enough information for young readers, and the pairings add a special twist.

A noteworthy review of Comparing Animal Differences from Children's Bookwatch on April 1, 2020

Is that a llama or an alpaca? An alligator or a crocodile? The animal kingdom is full of creatures of all shapes and sizes, but occasionally there will be two that are seemingly identical. Each individual title in this twelve book set breaks down the similarities and differences between two animals that are commonly confused. Vivid images give young readers ages 5-8 a close look at each animal, highlighting the differences described in the text. Additional features include a side-by-side comparison of the animals, an activity encouraging readers to demonstrate their knowledge, a phonetic glossary, sources for further research, an introduction to the author, and an index. Enhanced with the inclusion of a phonetic glossary, sources for additional research, thematically relevant web sites, and activities for further learning, and unreservedly recommended for both elementary school and community library Pets/Wildlife collections, it should be noted that this outstanding series is comprised of: Alligators and Crocodiles; Butterflies and Moths; Dolphins and Porpoises; Hares and Rabbits; Leopards and Cheetahs; Lizards and Salamanders; Llamas and Alpacas; Puffins and Penguins; Spiders and Daddy Long Legs; Toads and Frogs; Turtles and Tortoises; Wasps and Bees.