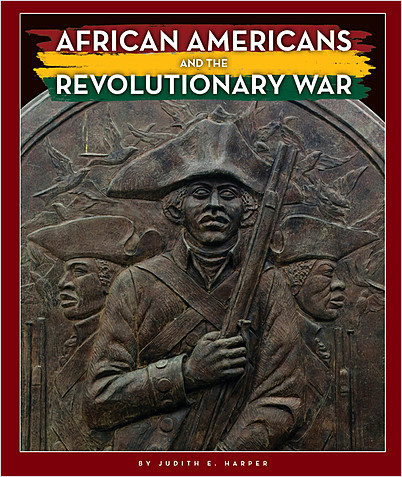 African Americans and the Revolutionary War

From the Set The Black American Journey

Portrays the treatment and struggles of African Americans during the Revolutionary War and their contributions to the war effort. Additional features to aid comprehension include a table of contents, informative captions and sidebars, a phonetic glossary,a time line, a Think-About-It section, and an index.

A noteworthy review of The Black American Journey from Booklist on September 1, 2021

The Black American Journey is the latest generation of the publisher’s Journey to Freedom: The African American Library series (circa 2000) and The African American Journey series (a decade later). Some of the recent books are entirely new, while others are revised editions. The repackaged texts appear to be largely unchanged, although sentences or sections have sometimes been reworded (e.g., using enslaved people rather than slaves) or even omitted. The new book design, slightly smaller format, and increased use of color give the pages a more inviting look, and the smaller font is more suitable for the audience. With few textual updates, African Americans and the Revolutionary War examines Black minutemen and soldiers and whether this war truly delivered freedom. John Lewis traces the leader’s path from childhood to Congress but concentrates on his years practicing nonviolent resistance during the civil rights movement. The Racial Justice Movement discusses topics such as the killing of George Floyd and the creation of the Black Lives Matter movement while placing them within the historical context of racism and civil rights in America. The Underground Railroad omits the 2002 edition’s section on patchwork quilts carrying secret messages for people escaping slavery, a notion that many historians regard as folklore. With well-chosen illustrations appearing throughout the books, this series offers concise, informative introductions to elements of Black history.

Libraries are a passion with me. All of my books have required that I spend lots of time doing research, so I have the pleasure of visiting libraries often. I'm lucky to live in the Boston area because there are so many excellent university and public libraries to become attached to! I've written five children's books--four for The Child's World--and two adult reference volumes. It was a dream come true to write a biography of the hero from my childhood--John F. Kennedy--for The Child's World. Much of my research for that book was conducted at the JFK Library and Museum. My special area of expertise is U.S. history, particularly nineteenth-century women's history. I've just spent four and a half years researching and writing my labor of love--an encyclopedia of women during the Civil War, to be published in 2003. My other adult book, published in 1998, is an A-Z encyclopedia of Susan B. Anthony's life and work. When I'm not working, I'm reading for pleasure, hanging out in art museums, or indulging my interest in outdoor sports. I love canoeing, walking, swimming, cross-country skiing, and dog shows.