A noteworthy review of Weird-but-True Facts from Booklist on April 1, 2013 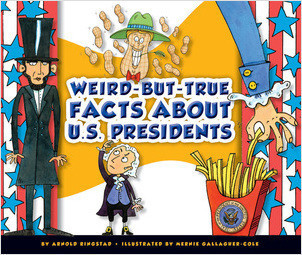 Pop-eyed cartoon figures, loud colors, and big, emphatic type crank up the hype for an assortment of quirky presidential abilities, characteristics, pastimes, and firsts. Though some will astonish readers of any age—Garfield, for instance, supposedly could write simultaneously in Latin with one hand and Greek with the other—most are pitched to children young enough to be wowed to learn Jimmy Carter was a peanut farmer; Hayes was the first to have a telephone; and that Washington, Jefferson, and John Adams collected marbles. Some of the claims are questionable (Lincoln was not the first president with ‘facial hair,’ though he was the first to sport a full beard). There are just three to six entries per spread but enough for budding trivia fans, who’ll relish this random-trivia handful and likely look for other volumes of the Weird-But- True series.