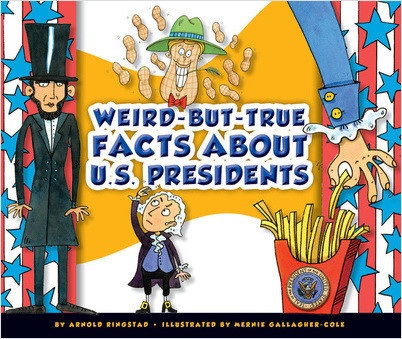 From the Set Weird-but-True Facts

A noteworthy review of Weird-but-True Facts from Library Media Connection on November 1, 2013

This series is a fun way to look at history and information. Colorful pictures will attract readers of all ages. The pages are not overly wordy, which will appeal to children. Facts are presented as short snippets of information that are similar to those in trivia games. The books will appeal to children, as well as provide a short fun read-aloud by adults. Glossary. Table of Contents. Index.

A noteworthy review of Weird-but-True Facts from Booklist on April 1, 2013

Pop-eyed cartoon figures, loud colors, and big, emphatic type crank up the hype for an assortment of quirky presidential abilities, characteristics, pastimes, and firsts. Though some will astonish readers of any age—Garfield, for instance, supposedly could write simultaneously in Latin with one hand and Greek with the other—most are pitched to children young enough to be wowed to learn Jimmy Carter was a peanut farmer; Hayes was the first to have a telephone; and that Washington, Jefferson, and John Adams collected marbles. Some of the claims are questionable (Lincoln was not the first president with ‘facial hair,’ though he was the first to sport a full beard). There are just three to six entries per spread but enough for budding trivia fans, who’ll relish this random-trivia handful and likely look for other volumes of the Weird-But- True series.

A noteworthy review of Weird-but-True Facts from School Library Journal on April 1, 2013

These high-interest titles deliver information on a variety of subjects. Each volume begins with an introduction to the topic and closes with the somewhat redundant assertion that the ‘weird-but-true’ facts ‘are all true!’ The facts themselves are printed in a bold, colorful font with supporting comments following in a smaller, less flashy typeface. Cartoon spot illustrations vary in quality from volume to volume, but are high in child appeal overall. The material covers a wide range of subjects, but the authors appear to have a good grasp on what will attract children, e.g., during his impeachment trial, President Nixon ‘was accused of illegally raising the price of McDonald’s hamburgers.’ These amusing books will be popular for browsing, but are not informative enough for homework purposes.

Mernie Gallagher-Cole is a children's book illustrator living in West Chester, Pennsylvania. She loves drawing every day. Her illustrations can also be found on greeting cards, puzzles, e-books, and educational apps.