A noteworthy review of The Spark of Invention from Children's Bookwatch on February 1, 2016 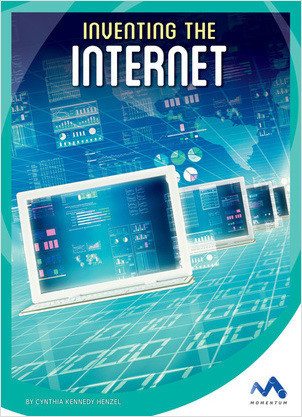 ‘Inventing the Internet’ is a photo-illustrated educational resource about the source, invention, and impact of the internet, for young readers age 7-8 and up. Tracing the early beginnings of the internet and computers to the 1950’s, important inventors mentioned are J.C. R. Lickliker, Paul Baran, and Donald Davies. Together their ideas moved forward the early computer network of communication systems, developed through ARPA in the U. S. (Advanced Research Projects Agency). From ARPAnet to internet traces the early development of information sharing through routing on small computers called nodes. Eventually the names of Steve Wozniak and Steve Jobs are introduced, along with their Apple II computer system (1977). Steve Case also pioneered the idea of social media, and America On Line (AOL) in the late 1980’s. But in 1991 a talented Swiss inventor named Berners-Lee created the World Wide Web, which is different from the Internet. The Internet connects computers, while the Web connects people. Berners-Lee did not sell his invention or make money from it. He gave it to the world. Further developments trace the beginning of Web browsers, blogs, and the Google system, invented by Larry Page and Sergey Brin, students at Stanford University. Jimmy Wales and Larry Sanger started the Web site Wikipedia, like a free encyclopedia online. Tiny chips now contain complex computers, and have changed the way of communicating all things now and into the future. ‘Inventing the Internet’ has a Glossary page at the end, plus a list of related books and web sites for further information. Other titles from this innovative juvenile Momentum series that are highly recommended include: ‘Inventing the Skateboard’ (9781634074599), ‘Inventing the Snowboard’ (9781634074605) ‘Inventing the Television’ (9781634074612), ‘Inventing the Video Game’ (9781634074629), ‘Inventing the Cell Phone’ (9781634074551), ‘Inventing the Hybrid Car’ (9781634074568), and ‘Inventing the Personal Computer’ (9781634074582).