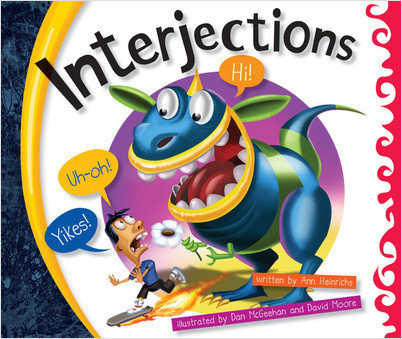 Wow! A book all about interjections! What is an interjection, anyway? Find out just that as you explore the ways interjections work in reading, writing, and speaking. Interjections will make your sentences more exciting--no kidding!

A noteworthy review of Language Rules! from Booklist on October 1, 2010

Volumes in the Language Rules! series take on adverbs, conjunctions, pronouns, and more, but is there any part of speech more enjoyable than interjections? As the bratty kid brother of the language family, interjections get all the fun exclamations—Yikes! Drat! Shhh! Wham!—all words well suited to McGeehan and Moore’s gallery of horned, spiked, beaked, clawed, multi-eyed, and fabulously colored monsters, who cavort across the pages illustrating each principle. For example, Heinrichs discusses the prevalence of exclamation points, and a pink blob shouts, ‘Hey! Get that monkey off my head!’ Some interjections, writes Heinrichs, are happy (‘Golly!’ ‘Yum!’); some are unhappy (nothing harsher here than ‘Nuts!’); some just take up space ‘(’Well,’ ‘Um’); and—watch out!—some are actually verbs (‘Help!’ ‘Look!’). Particularly interesting is the idea that interjections might have been the earliest human speech—though it probably did not include, as the illustration suggests, ‘Whoopee!’ Bouncy, amusing, educational, and cleverly laid out, this is a great go-to resource to supplement dry language texts. Brief additional readings, a glossary, and an index close.