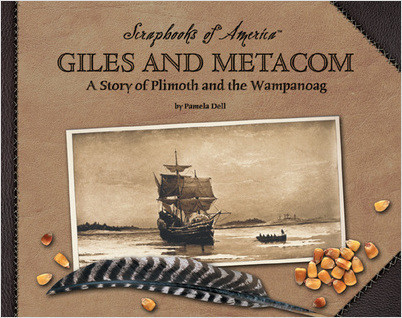 A Story of Plimoth and the Wampanoag

From the Set Scrapbooks of America

An unexpected friendship is at the center of this unique look at the first Thanksgiving. Young Giles meets up with Metacom, one of the Wampanoag living in the area near the Plimoth Colony, and comes to a new understanding about the Native American people. Readers will learn about the early colonists in America and the Indians who helped them survive.

A noteworthy review of Scrapbooks of America from School Library Journal on May 1, 2003

While the appearance of these brief titles suggests nonfiction, each one brings to life an event as seen from the perspective of a fictional young person. In Freedom’s Light, Mary Cates, 12, is an aspiring spy who works in Paul Revere’s silversmith shop. When she eavesdrops on a crucial conversation between two traitors to the revolutionary cause, she becomes involved in the beginning of the War. In Giles, an 11-year-old who lives in Plimoth follows an ‘Indian youth’ into the woods because he believes that the young Wampanoag is stealing from the colony’s warehouse. Giles is caught by Metacom and learns to appreciate the Native American way of life. The boys return to the colony with a newfound respect for one another. Each small-print title combines a good story with an account of the time period, and includes captioned, black-and-white and color archival illustrations and photos on almost every page. These books should find an audience, particularly among reluctant readers.

Pamela Dell has been writing for kids since the late 1980's, including work in both print and interactive multimedia. In the mid-1990's, she became one of the founders of Purple Moon, a highly acclaimed interactive game company for girls. As part of her role there, Pamela created the characters and scripts for the company's multiple-award winning Rockett CD-Rom game series. She has also produced work, both fiction and nonfiction, for clients such as Mattel, Carus Publishing, World Book Encyclopedia, Children's Press, Plan B Enterprises, Addictive Media, and the University of California, among others...subsequently nominated for a Pushcart Prize.