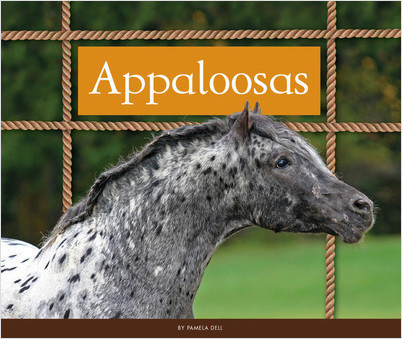 From the Set Majestic Horses

Do all Appaloosas look alike? Where did Appaloosas come from? Learn all about these beautiful, spotted horses inside.

A noteworthy review of Majestic Horses from School Library Journal on April 1, 2014

Through clear, straightforward prose, the author provides a solid overview of each horse, including physical characteristics, behavior, and history. One or two fact boxes appear on each text page, offering relevant bits of information without distracting from the narrative. Each spread includes one page of text opposite a single full-page photograph that depicts a full-body view of the animal. Each book closes with the same labeled diagram that shows 33 horse body parts. Though each horse’s suitability as a pet is mentioned, the focus remains on breed information, rather than pet care or training techniques. Brief mention of conservation efforts is included where relevant, as with Mustangs and Przewalski’s Horses. Though neither the writing nor the photographs are exceptional, the attractive, uncluttered layout and the well-organized progression of information make these effective introductions to horse breeds.

Pamela Dell has been writing for kids since the late 1980's, including work in both print and interactive multimedia. In the mid-1990's, she became one of the founders of Purple Moon, a highly acclaimed interactive game company for girls. As part of her role there, Pamela created the characters and scripts for the company's multiple-award winning Rockett CD-Rom game series. She has also produced work, both fiction and nonfiction, for clients such as Mattel, Carus Publishing, World Book Encyclopedia, Children's Press, Plan B Enterprises, Addictive Media, and the University of California, among others...subsequently nominated for a Pushcart Prize.