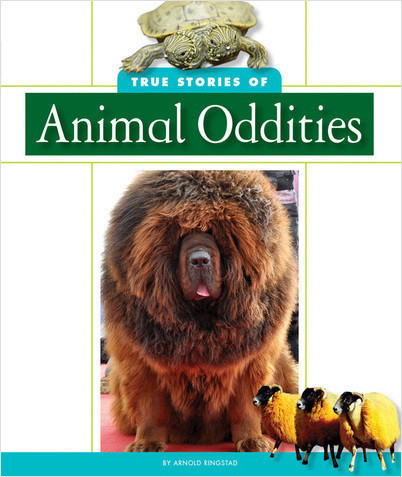 From the Set True Animal Stories

Discover some amazing-but-true stories of animal oddities, including a two-headed turtle and orange sheep.

A noteworthy review of True Animal Stories from School Library Journal on November 1, 2014

Each of these title includes nine narratives about unusual animal events. The lesser-known stories, such as a bike-riding dog (Animal Tricks and Talents) and a water-squirting octopus (Animal Antics), are mixed with more widely known tales, such as the friendship between a Owen, a hippo, and Mzee, a tortoise (Animal Friends) and Koko, the gorilla who learned sign language (Animal Tricks and Talents). Other accounts, such as ‘The Frog and the Dragonfly’ (Animal Friends) and ‘The Dancing Bear’ (Animal Antics) are the result of the photographer’s anthropomorphic imagination and a serendipitous encounter with an unsuspecting animal. The treatment is more matter-of-fact than Picture Window’s ‘Animal Heroes’ series, though there is some overlap (such as Scarlet the cat and Sergeant Reckless). This series will be appreciated by practicing readers, who will be spurred on further research and the ‘Chapters’ series (National Geographic Kids). Fun books with strong kid appeal.