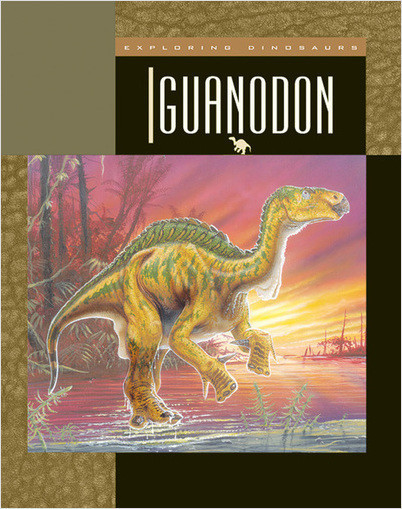 Life was often difficult for the Iguanodon. It couldn't fight larger dinosaurs with sharp teeth or pointy spikes. Even thunderstorms could pose a danger. Learn how Iguanodon survived on Earth for nearly twenty million years and why its fossils have been discovered all over the planet.

A noteworthy review of Exploring Dinosaurs and Prehistoric Creatures from School Library Journal on September 1, 2004

Each of these books opens with a dramatic scene to introduce the behavior and habitat of a dinosaur species. Subsequent chapters describe physical characteristics, diet, and other key data. Short, lucid sentences and double-spaced text keep the information easy to follow. Gray relates how scientists discovered and subsequently studied each species over time, conveying the importance of that work to our knowledge of dinosaur history and behavior. She also notes how theories and ideas can change with new discoveries. Special sections, set off with different backgrounds and smaller print, present slightly more complex information about topics such as fossil formation and dinosaur coloring, or about more specific events, such as the inaccurate naming of Oviraptor. These asides help keep presentation lively and relate effectively to the main topics. Illustrations include various drawings of dinosaurs and photos of fossils and of paleontologists in the field. With the exception of Coelophysis, other recent titles on these species are available, but these volumes are well organized and offer the right amount of detail for their intended audience.